One meeting can transform your career. Discover how → 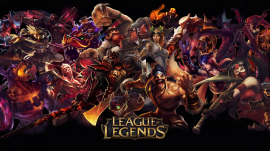 ICE Malta have confirmed their participation in this year’s edition of the Konnekt Malta eSports Festival, a weekend packed with competitive tournaments in a variety of games on both PC and PS4, which will be held at the Mediterranean Conference Centre between Friday the 31st of October and Sunday 2nd November 2014. This year apart from being one of the main partners for the festival, the institute have confirmed exclusive sponsorship of ‘League of Legends’ the  MOBA game that has been in the international spotlight for almost five years.

‘We’re proud sponsors for the eSports Festival for the second consecutive year. The majority of participants and ‘gamers’ are past & present ICE Malta students therefore this is an exceptional opportunity for us to celebrate the local gamers community and give participants the opportunity to compete in what is considered to be a world wide sensation – League of Legends’ Nikolai Sammut, director of ICE Malta explained.

Interested participants have the opportunity to book at a reduced price. The Early Bird offer ends on Sunday 19th October 2014. Tickets include access to the Vending Section, Exhibitions, Artist Gallery, Autographs Room and the Food Court during the expo.

‘Our primary objective is to show Malta’s true gaming potential  and the best way to do this is to bring together game enthusiasts and local and international companies together, we are proud to have the support of so many prestigious brands including ICE Malta who will be supporting our festival for the second consecutive year. On behalf of gamers.com.mt I would like to invite the general public to join us and participate in what promises to be yet another memorable festival’ Kersten Chircop, Founder of gamers.com.mt explained

ICE Malta proudly present the 2014 edition of the League of Legends Gold Tournament.