In response to COVID-19, we’ve shifted all our courses to online LIVE until schools re-open.

ICE Malta welcomed students, guests, educational partners and Dr Chris Cardona, Minister for the Economy, Investment & Small Businesses, for the Cisco Netriders 2014 prize giving ceremony celebration held at ICE Malta, Zebbug. For the second consecutive year, the institute hosted the national finals which give local ICT talent the opportunity to compete with over 40,000 students from all over the globe with the chance of winning an all expense paid study experience in Cisco California.

‘During the last academic years we’re proud to have strengthened the Cisco brand in the Maltese islands. We are committed to continue to show how Cisco study programmes are an integral part of a student’s education – no matter what career they would like to embark on. Our students’ academic results show that our educators are the finest industry leaders on the islands while our investment in marketing together with last year’s competition results achieved by Ryan Chetcuti has continued to put Malta on the Cisco map. Once again, we will be giving all winners complimentary mentorship and study time to ensure that they’re ready for this challenging competition – a potential second win for the Maltese islands would be history not just for us but also for Cisco so this is our ultimate goal’ Nikolai Sammut, director of ICE Malta explained.

Special guest Luca Lepore, Cisco’s Networking Academy Manager in Italy announced this year’s winners for both the IT Essentials and CCNA competition. The winners are:

ICE Malta student Christopher Demicoli will compete in the international finals from Cisco Milan while the other three local finalists will also take part in the international competition. During the prize giving, Ruben Azzopardi, Cisco Malta Branch Manager, presented each of the Cisco IT Essentials & Cisco CCNA first place winners with a Nokia Lumia smartphone courtesy of Logicom Distribution, authorised distributors for Cisco products while all winners were given an Mdina Glass trophy designed especially for this year’s competition.

Minister Cardona congratulated the winners and encouraged the other competition participants not to be afraid to come up with new ideas and pursue them with confidence:  ‘Don’t be afraid to think big thoughts. You might never know what you can achieve until you go out to try.’ said Minster Cardona.

‘Keep coming up with your ideas, seize opportunities and be the best you can be. We don’t know where we — or technology — will be in 10, 20, 30 years or more but it’s going to be an adventure finding out.’ concluded Minster Cardona.

During the event, Mr Lepore also confirmed that ICE Malta is the selected host institute for the 2015 & 2016 edition of this prestigious competition. 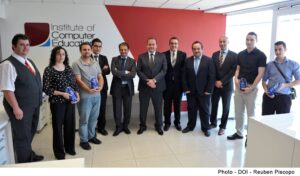